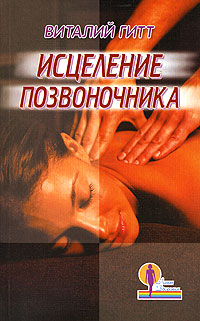 For more than a quarter century a known in Russia and abroad chiropractor Gitt helps people to get rid of diseases of the joints and spine. During his long practice Vitaly Gitt has enriched the theory of manual therapy with his own breakthroughs.
And, indeed, V.Gitt was the first specialist who have achieved almost one hundred percent cure rate whith the patients with arthrosis up to the most complex cases. With almost the same method people are cured not only of arthrosis but of tendonitis, myositis, synovitis, and many others deseases. V.Gitt developed a methodology of regular chiropractic care to unprecedented limits. Perhaps he is the only specialist in the world, which helps people to get rid of scoliosis and other spinal curvature without surgery. His technique allows the patients of any age to get rid of degenerative disc disease, spinal protrusions and herniations.

The methodology of V.Gitt was based on the assumption that throughout all our life all our organs, joints and bones are in the process of constant adjustment. And really, how could the broken bone coalesce if it was not alive, constantly growing and renewing?
Constant, methodical exposure to the spine and joints can cause them to change in one direction or another. Fix the joint with the plaster for a couple of months, and it would lose its mobility. Let it move - and it "comes to life." And, for example, lack of movement in the spine leads to its gradual compression and destruction - a degenerative disc disease.

Treatment of arthritis: the three "pillars" of V.Gitt's method

One. Micromotions. One of the basic components of Gitt's method is the theory about the benefits of micromotions - that is, movements in the "homeopathic" amounts that improve the feed of the joint. Of course, this is not possible without the constant, daily work of the patient, for whom micromotions should become a habit, if not the way of life. Fortunately, it is easy to implement them, and, most importantly, they do not need a special time and place.

In search of the best and speedy way of healing the joint and spine deseases, V.Gitt has developed a several types of vibrating beds (vibrobeds) that make the treatment even more effective. On the vibrobed the patient may be able to reach a complete relaxation and have hundreds of micromotions in a minute.

Two. "Percussion massage". The second component of treatment of joints is the impact effect of the chiropractor (the so-called "percussion massage"), which activates the processes occurring in the joint and lead to its rehabilitation.

Three. Protein-free diet. Long-term observations have led V.Gitt to another assumption - that the food we eat also has an impact on the state of our joints. V.Gitt suggested that the excessive protein triggers autoimmune processes in the body that lead to inflammation and trauma of the joints. Exclusion of the protein from the diet quickly leads to a healthier body, reducing the level of white blood cells, reverse the rheumatic process. However, the diet has no effect on those patients whose arthritis has arisen due to trauma or congenital abnormalities of the joint.

Vitaly Gitt is the author of several books on manual therapy, as well as hundreds of popular articles. All of them are presented in this site as well as Video lectures of V.Gitt in Russian. Still some people may want to translate them to their nanive languages, if so you can contact us and suggest yourself as a translator. Yet, a Bulgarian version is available here (thanks to translator Patya Stoyanova).

Is there an alternative?

V.Gitt is an active opponent of the so-called dietary supplements that are issued for arthritis drugs.  He considers them as ineffective and harmful, and as well as a standard physical therapy. In addition, V.Gitt is doing everything possible to save as many as possible people from expensive and traumatic operations of joint replacement.